What is a Golden Shepherd? The Ultimate German Shepherd Golden Retriever Mix Guide

What is a Golden Shepherd? The Ultimate German Shepherd Golden Retriever Mix Guide

What is a Golden Shepherd: The Ultimate German Shepherd Golden Retriever Mix Guide

Both the Golden Retriever dog and the German Shepherd dog have become some of the most beloved breeds of dogs. Crossbreeding them produces a dog that possesses all of their best qualities- intelligence, loyalty, and affection. Let's dive into the origin and characteristics of each of these cherished dog breeds.

Both the Golden Retriever dog and the German Shepherd dog have become some of the most beloved breeds of dogs. Crossbreeding them produces a dog that possesses all of their best qualities- intelligence, loyalty, and affection. Let's dive into the origin and characteristics of each of these cherished dog breeds.

The Golden Retriever dog was first recognized by the American Kennel Club in 1932. They are classified as medium sized sporting dogs, and are described as being friendly, intelligent, and devoted.

The breed originated sometime during the 19th century in Scotland. They were developed by British aristocrat Lord Tweedmouth, who had a goal to create a dog that was extremely athletic and could hunt/retrieve in the fields of Scotland.

Golden Retrievers usually range from 65-75 pounds (male), and 55-65 pounds (female), and have a life expectancy of 10-12 years. They are a very popular dog breed to crossbreed and have created various designer breeds such as the Golden Retriever Corgi Mix. Potential health issues relating to Golden Retrievers are elbow or hip dysplasia, eye conditions, and certain heart diseases. A responsible and reputable breeder will screen for these types of health conditions.

Today's Goldens make for great family dogs or service dogs. They are high energy, eager to please and to learn, and are relatively easy to train. They have medium length double dark rich gold coats and have often been described as one of the most intelligent dog breeds. Golden Retriever dogs are outgoing, joyous, playful, and love to play fetch! 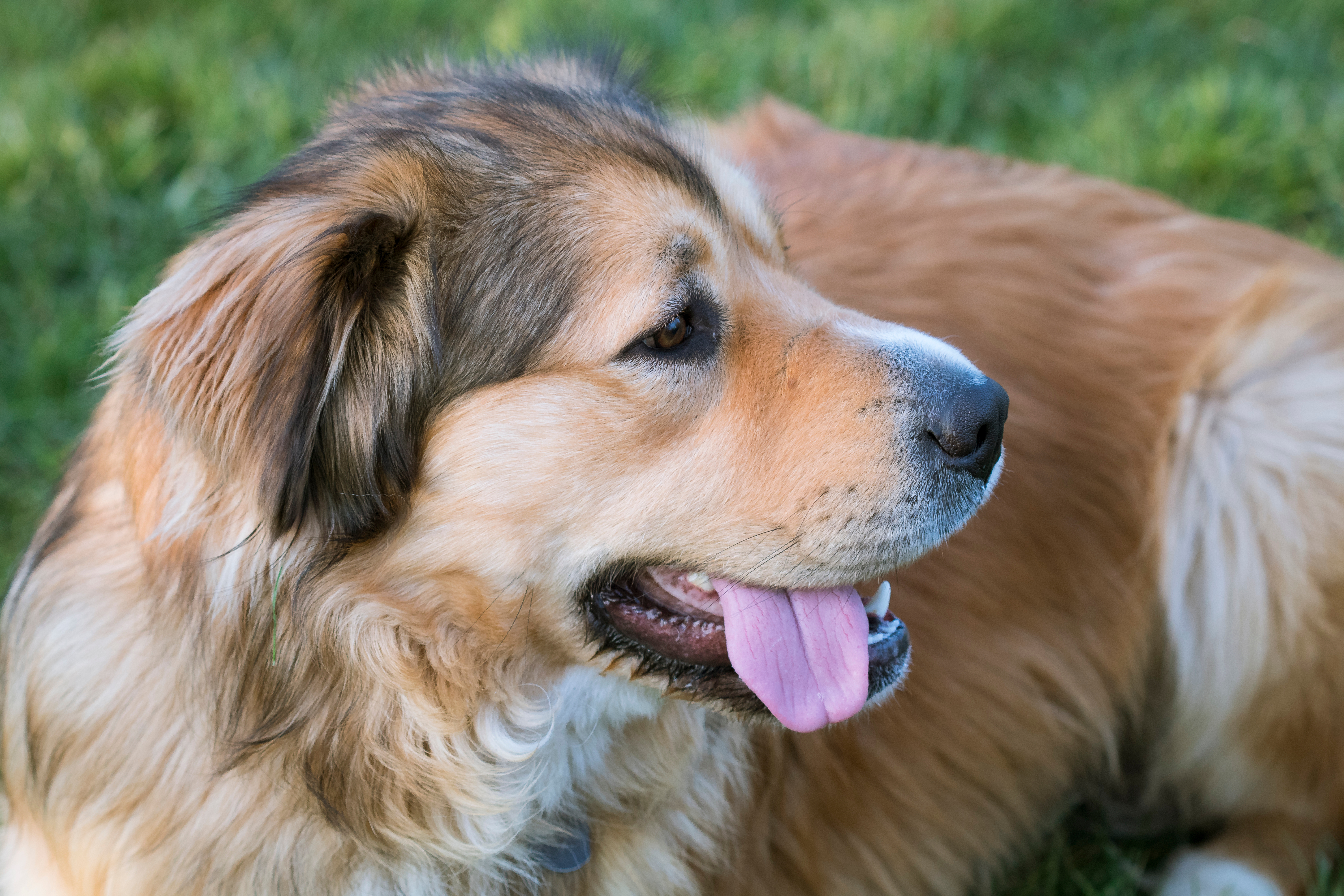 The German Shepherd Dog (GSD) is characterized by the American Kennel Club as confident, courageous, and smart. Being large, agile, and muscular- the German Shepherd dog is widely considered an excellent all-purpose working dog. They are extremely intelligent and have a noble character.

The German Shepherd breed was first developed as a herding dog in Germany during the 19th Century by Max Emil Friedrich von Stephanitz, who is known as the "Father of the Breed". They were registered by the American Kennel Club in 1908.

German Shepherds have a life expectancy of 7-12 years. They commonly range from 65-90 pounds (male), and 50-70 pounds (female) in weight. Like the Golden Retriever dog, they have a medium length double coat. They are most commonly black/tan or black/red in color. Some health issues related to German Shepherds are degenerative myelopathy and elbow and hip dysplasia, which a responsible breeder should screen for. German Shepherd dogs are also at risk for bloat; a sudden and life-threatening swelling of the abdomen. Owners should educate themselves about the symptoms of bloat and what to do should it occur.

The German Shepherd dog is one of the most popular and recognizable breeds of dogs recognized by the American Kennel Club. They are fiercely loyal and protective and can make for a great family pet; protecting you and your family is instinctual for them. If well trained, GSDs can be immensely loyal and affectionate. 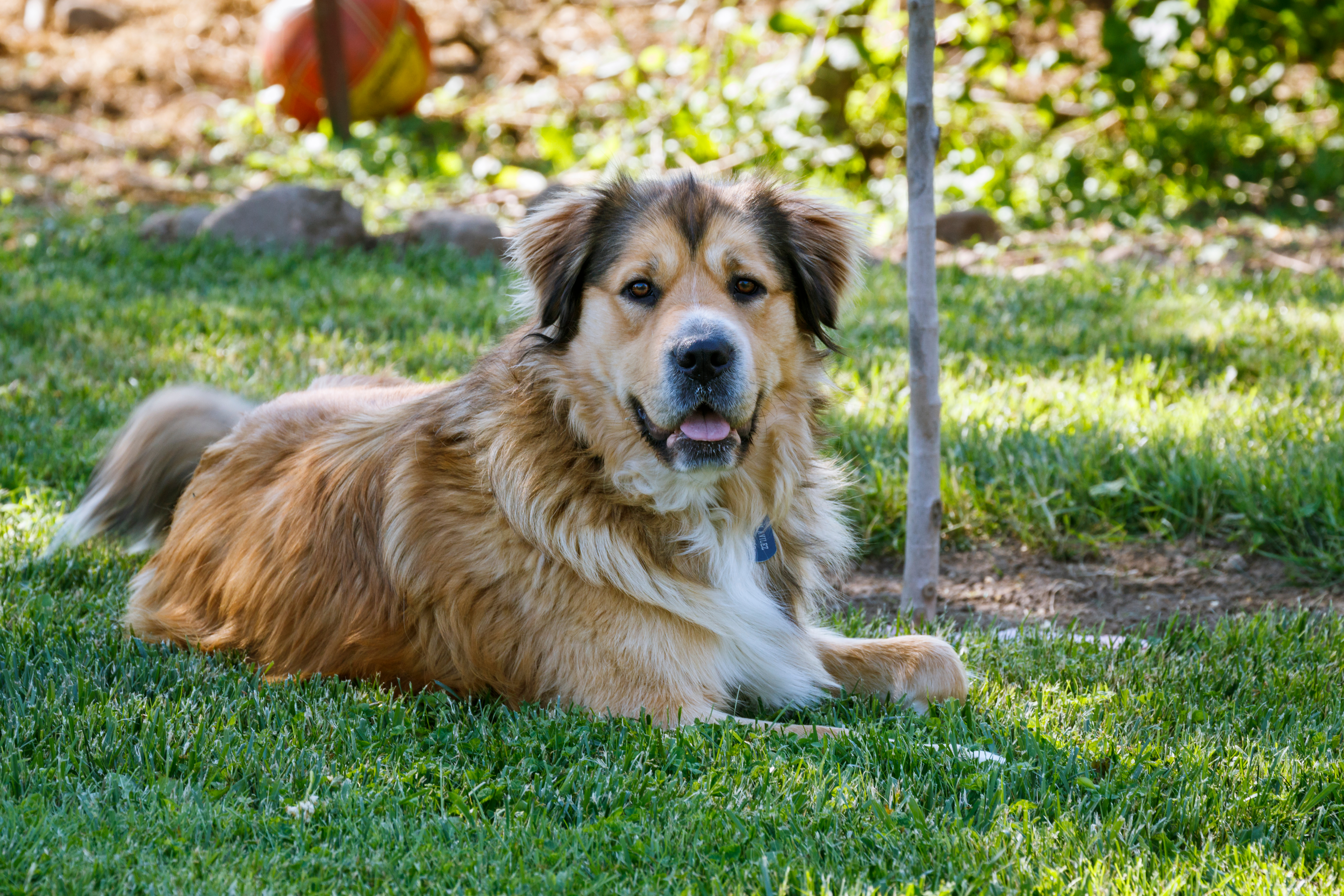 Just like the their parent breeds, the German Shepherd Golden Retriever mix dog will usually have a medium length double coat. Depending on the parents, the Golden Shepherd dog may possess a medium-long length coat. Their coats will be thick and dense, therefore this dog breed is considered a moderate shedder. For this reason, Golden Shepherds are not considered hypoallergenic dogs.

The Golden Shepherds' coat colors will be either black and tan, solid black, dark golden, golden, solid white, or solid brown. Coat Colors are ultimately dependent on and inherited from the parent breeds.

Tips for grooming your Golden Shepherd:

Considering the Golden Shepherd's high intelligence level - owners should be cautious of any holes or gaps in their fencing or enclosures. This dog is surely capable of figuring a way out if the opportunity presents itself! 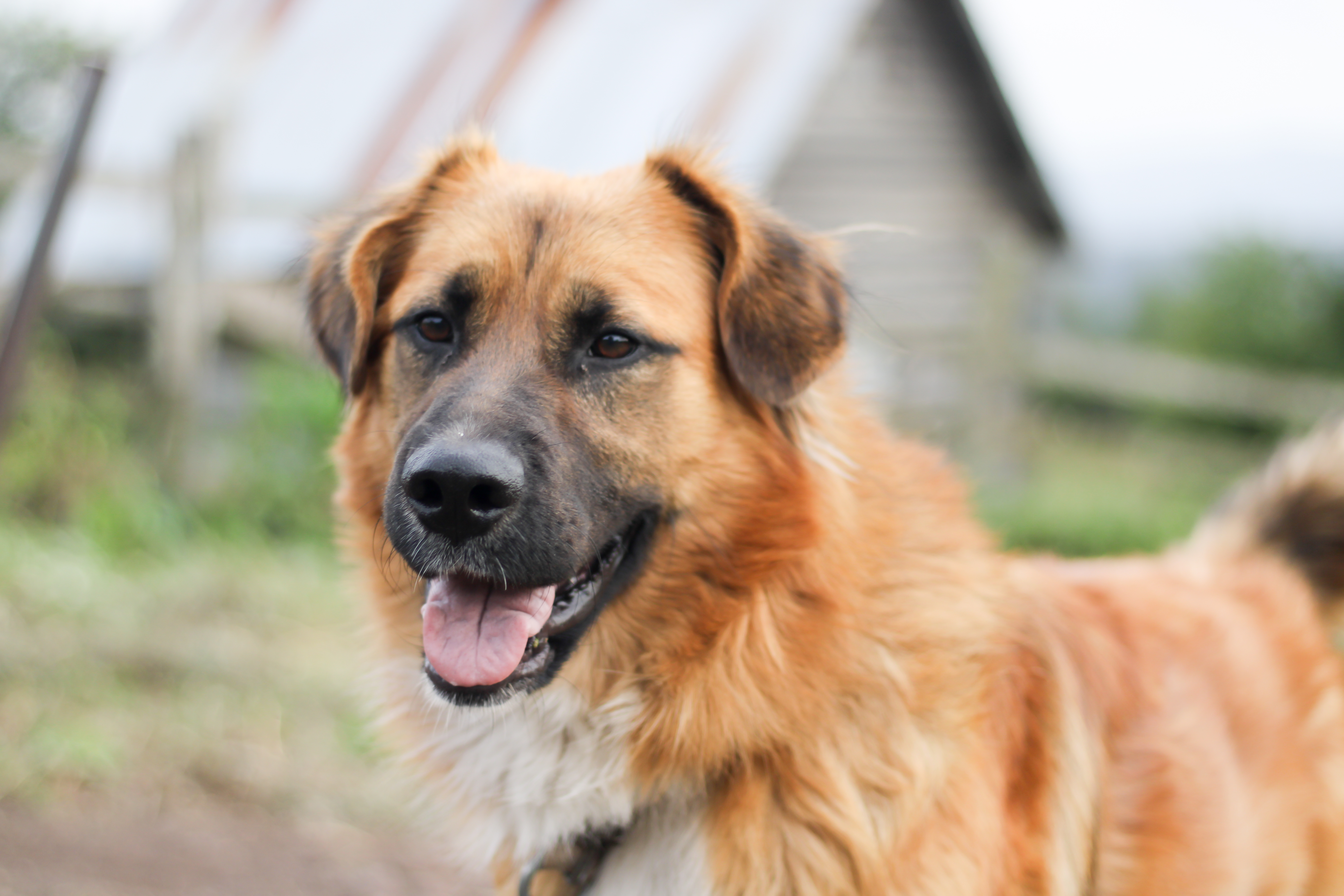 Golden Shepherd puppies (like all puppies) should start to be trained as early as possible. Ideally, this would be within the first 6 months of their lives. Dog training helps with basic obedience and social skills, house training, and helps challenge and entertain your doggo. Positive reinforcement works best with Golden Shepherds (and with most dogs), since they are eager to please and love being rewarded and praised. It is important to keep an upbeat, positive tone with your dog while training him or her. Dogs rarely respond well to aggression or negative reinforcement.

Golden Shepherds can be trained to be great guide dogs (inherited from the Golden Retriever dog), and/or guard dogs (inherited from the German Shepherd dog). It is important to adapt your pup to other dogs and humans as soon as it is advised by your vet (usually once all recommended vaccinations are complete). This kind of early socialization will help your dog easily adjust to the everchanging world around him or her, and help them become more easy-going around newcomers. This will also help them to be less distracted by loud or alarming sounds and sights - such as squirrels!

In general, Golden Shepherds are relatively easy dogs to train and teach lots of fun tricks to.

Golden Shepherds are very high energy dogs. This means that they usually require a good amount of exercise and attention. They would do best with attentive and active families. If left alone for too long, your dog could run the risk of developing separation anxiety. For this reason, you should never leave your dog alone for more than a few hours. The Golden Shepherd's high energy levels can also mean that your pup can easily become bored or restless. This may lead to some destructive behavior. No worries though, a simple walk or game of fetch can help prevent this!

Golden Shepherds should ideally get around 45 minutes of exercise per day. This can include long walks, hiking, running around and playing at the dog park, or playing fetch. The activity level of this breed should be high to match their high energy level. Also be sure to stock up with plenty of indoor chew toys and balls. The Golden Shepherd will thrive with lots of playtime! 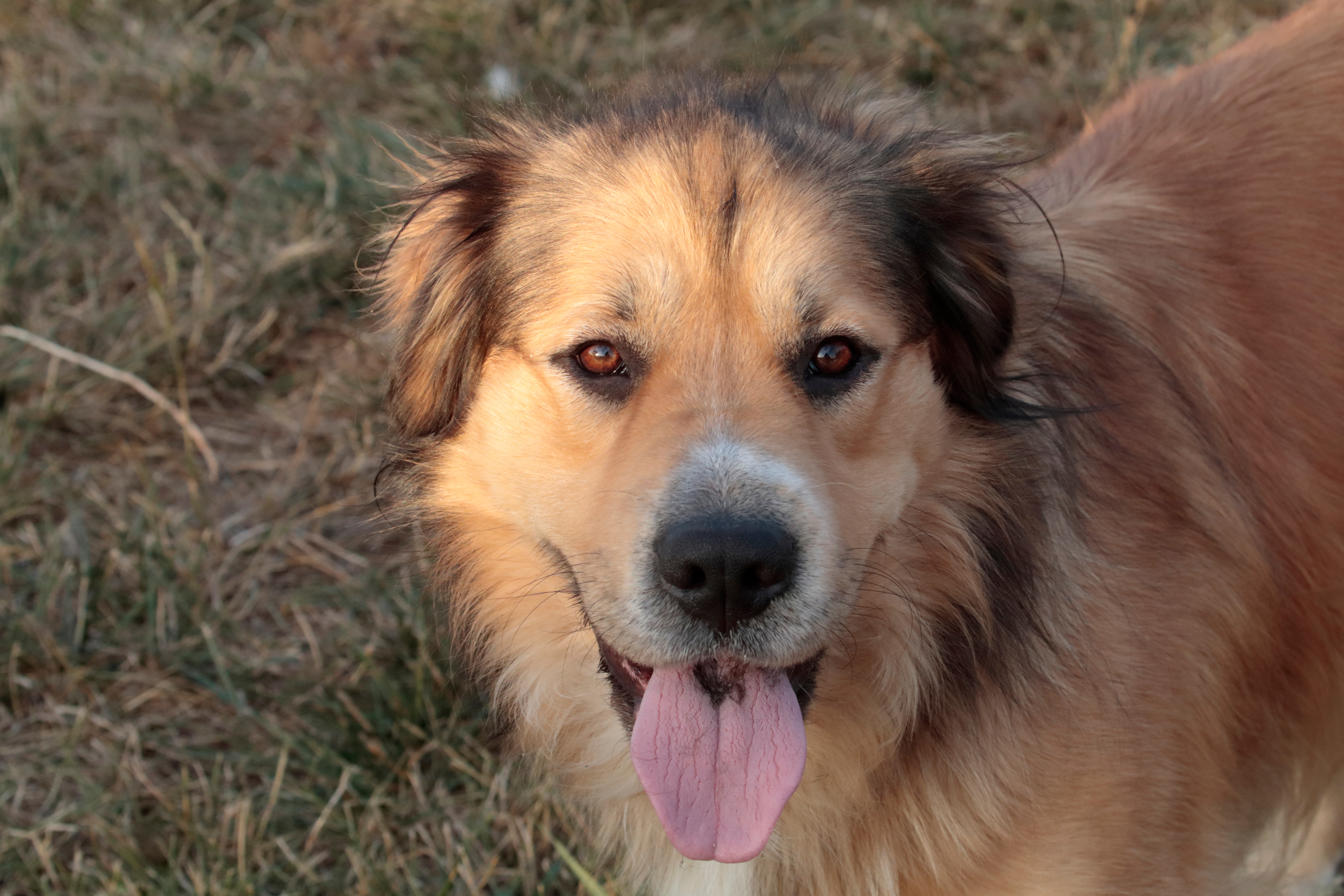 Like any dog breed, the Golden Shepherd dog is prone to a set of specific health issues. It is important for dog owners to be aware of these potential health problems to help them monitor and better care for their pups.

While these potential health issues may seem scary, the Golden Shepherd dog is a relatively healthy dog. Thanks to the health improving results of crossbreeding, this hybrid dog is generally healthier than its parent breeds and enjoys a slightly longer life expectancy.

The average lifespan of the Golden Shepherd is 10-14 years old. 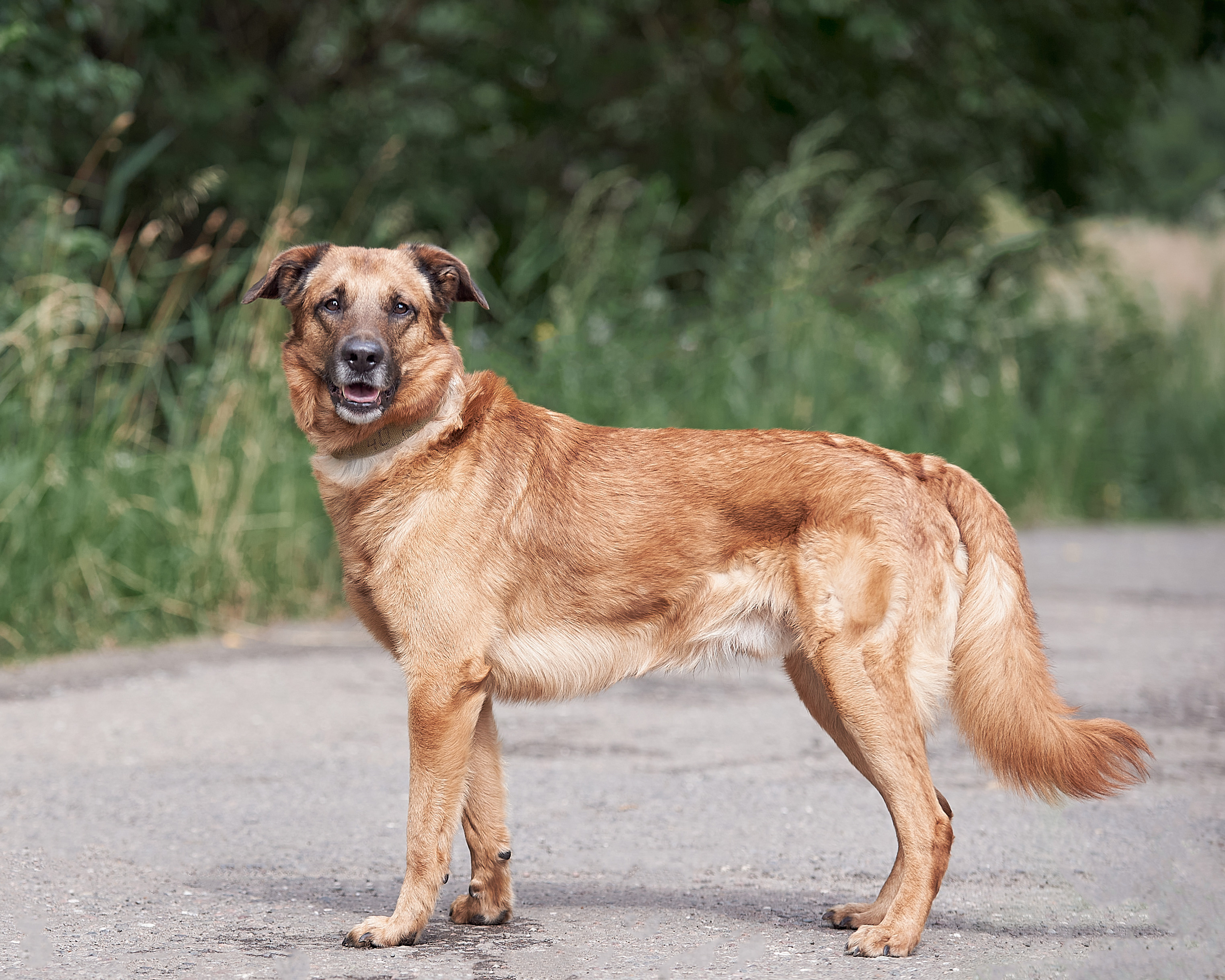 On average, the adult Golden Shepherd dog will require about 3 cups of dog food per day. Of course, this varies by pooch and is dependent on their size, age, and activity level. As with everything, consult with your vet about the exact amount of dog food you should be feeding your pup.

As with all dogs, your Golden Shepherd dog will benefit from a high-quality dog food. This may be in the form of wet food, fresh food, or a high-quality kibble. It is advised that you feed your dog at least twice daily, and avoid feeding him or her directly before or after intense exercise.

Yummy treats such as these calming zen chews may be a great option to feed your high energy or anxious dog.

Lower calorie dog training treats like these can also make for some great positive reinforcement in your pup's training journey! You can also find many great dog treats on Chewy and Amazon.

Try to be aware and cautious of how many treats you are treating your dog with. Weight gain and obesity in dogs is prevalent and can worsen the risk for the previously mentioned health issues.

Is Golden Shepherd Mix The Right Dog For You?

If you lead an active lifestyle and can offer lots of time, attention, and affection to your dog, then the Golden Shepherd just may be the dog for you!

Designer dogs and mix puppies are becoming more and more popular today. Coming from two of the country's most popular and respected purebreds, the Golden Shepherd makes for an excellent mixbreed dog that can make for a great family pet.

With some training and love, Golden Shepherd dogs can also make great guide dogs, service dogs, guard dogs, or watch dogs. They make for excellent companion dogs, and can offer a lot of joy and activity to your life. It is recommended that dog owners of this breed have a fully fenced in backyard or access to a large park for the dog to roam in.

On average, a Golden Retriever German Shepherd mix puppy will cost you anywhere from $500 to $800 to purchase from a breeder. This is relatively affordable for a designer dog bred from such popular purebreds. A simple Google search can set you out on your path to your pup. Websites such as Pet Finder are also great resources. Dog owners should be aware of the prevalence of non-reputable 'backyard' breeders. A reputable breeder will always screen for and make you fully aware of any potential health issues a dog may have.

It is always a great idea to check your local shelter if you are unable to afford this dog or are looking to adopt.

Give your Golden Shepherd some time and attention and practice with them some patience and daily physical activity, and you should expect and well-behaved, protective, and loving pooch. Remember, the more love you give your pup, the more love you will receive!

Check out these favorite blogs.
All articles

Dog Owner's Stress: Breaking Down the Cause and Effect

ThunderShirt for Dogs: Wrap Your Dog Up in Tranquility